What are Natural pesticides or insecticides?

Many plants have a natural protective mechanism that aids them in resisting and driving pests. Some plant species produce substances that repel or poison the insect. The Neem Tree contains substances that can be easily extracted and turned into a natural insecticide. Crushed seeds or seed kernels are mixed with water and the resulting solution is used to treat the plants.

All the pesticides derived from plants are not safe for humans, pets, and fish. Some Natural Pesticides are found to be toxic for Humans and other mammals. Few natural pesticides are toxic to humans and nontargeted pests and insects too, therefore you should always read the label before using an organic pesticide.

Some of the botanical extracts are pyrethrums, nicotine, and rotenone, though these are powerful natural pesticides their safety towards humans and other mammals is not established. Whereas Neem Oil is an established Safe yet Effective Natural Pesticide.

When a pest or disease is devastating your plants, refrain from grabbing the strongest chemical you can find. Always try simple and safe controls before using any pesticide. For example, sometimes a strong blast of water from a hose is all it takes to get rid of a pest. You can also hand-pick pests like caterpillars and drop them into soapy water.

Or shake Japanese and potato beetles off plants onto a sheet. And aphids, cabbage worms, and whiteflies are attracted to yellow so they can be trapped by covering a piece of yellow poster board with sticky glue and hanging it among the infested plants.

If physical controls don’t work, the next thing to try is a homemade organic pesticide. Homemade preparations are generally milder than commercial pesticides. For example, garlic makes an effective spray for most insects. Simply puree 15 garlic cloves and one pint of water in a blender, strain the mixture through a cheesecloth into a clean spray bottle, and apply to the tops and bottoms of all leaves. Repeat every few days until the problem is gone.

If homemade sprays are not strong enough, you may need to buy an organic pesticide. Horticultural oils, insecticidal soaps, and botanical insecticides are all organic pesticides. Most are safe to use on food Crops because they break down quickly and have no long-lasting effect on the environment.

Nonetheless, they should be used as a last resort. Because they’re not only toxic to the pests and diseases you are trying to eradicate, they can also be toxic to insects, birds, and soil microorganisms that are part of a healthy garden.

Before applying anything to your garden, identify the pest and disease you want to control so you can choose the most effective product. And always read the label and follow directions exactly.

Neem pesticides act by contact and systemic action in plants. Its active ingredients bio-degrade rapidly in sunlight and within a few weeks in the soil. Neem oil is established as non-toxic to humans and mammals. Clarified hydrophobic extracts of neem oil are also used in the treatment of fungal diseases of plants. Overall best natural pest control.

A number of Natural pesticides have been in use for many years, and have thereby escaped the cost of rigorous testing and licensing that operator today in the major agriculture countries of the world. Some of these are pyrethrum, rotenone or derris, nicotine sulfate, and ryania. Note that all consist of a number of compounds, which together act against the creation of resistance in pests. The insect toxicity of ryania is very selective.

Nicotine is a very toxic substance to humane, 70 times more toxic than potassium cyanide. but is very valuable in specialized use, and production is increasing. Because it is very volatile, residues present no problem. rotenone is licensed for organic production. There was a recent scare about it possibly being linked to Parkson’s disease (a condition of tremor and paralysis in older people), but that condition was induced in laboratory rats only by injection.

It is interesting to compare pyrethrum, a natural product, first recognized in China, and long on the market, with Cazadores. Kenya and nearby parts of East Africa are the biggest producers of pyrethrum (70%of world production) but production there has been badly affected by a recent drought. Production is projected to increase, rainfall permitting.

The Australian government and industry have invested heavily ($25 million estimated) into the development of a pyrethrum industry and the state of Tasmania now has 30% of the world market, with mechanized planting and harvesting in 2005 a  great of $700,00 was made for research on pyrethrum storage. Nowhere has received such support and focused research.

In those states of the USA formerly dependent on the tobacco crop, pyrethrum has been considered as an alternative. The cost of labor used to rule it uneconomic, but new cultivars of Chrysanthemum with high pyrethrum content and mechanical harvesters now make it a possible crop. World demand is said to be four times greater than current production.

Why use Natural Pesticides?

An insect can inflict great damage to crops. Many Gardeners, therefore, use synthetic pesticides in order to drive away, or to control these pests: However, many of these synthetic pesticides are also highly poisonous for humans and livestock. Moreover, these substances destroy a great number of useful insects which are an important factor in the natural control of pests. As a result, the plant is left unprotected against pests, and increased spraying of pesticides is thus necessary.

These disadvantages can be avoided by using biological pesticides such as extracts from neem trees which are both effective in controlling pests and, at the same time harmless to humans and Other warm-blooded organisms.

Read More: How to Get Rid of Ants

Using synthetic pesticides is hazardous under any circumstances.

Along with targeted insects and pests, chemical or synthetic pesticides kill useful organisms also, especially predators, which in turn affect species and agricultural growth. Immunization of pests and Insects results in increased dosages and application of further toxic pesticides.

Synthetic pesticide use may result in hazardous effects in animals, creating a potentially toxic environment for humans.

Pesticides Labeled For a Reason

Gardens Nursery Crew receives numerous questions this time of the year regarding pesticide use and food safety. The good thing is that folks are calling, emailing, or stopping by and asking before they assume the situation is okay.

For example, a gardener sprays his pepper plants a couple of times with an insecticide or fungicide not approved for use on peppers. The gardener reads the label after the fact and becomes concerned when he or she doesn’t see that crop listed. The gardener then contacts the Extension Service asking the question, “Can I still wash the peppers and remove enough of the pesticide so it’s safe to eat?”

Unfortunately, the answer to the question is “no.” The crop could just as easily have been squash, tomatoes, watermelons, apples, lemons, collards, or a host of other fruits and vegetables commonly grown in gardens throughout South Mississippi.

When a Garden nursery website receives questions about the advisability of consuming fruits or vegetables containing a residue of a pesticide not cleared for use on the food crop in question, our response of “don’t eat it” is based on the following facts:

Common sense suggests that harmful health effects probably wouldn’t result from eating the tomato fruit described earlier since the fungicide is okay to use on other food crops. So, what’s the big deal? According to state and federal pesticide laws and regulations, it boils down to the fact that “food crops containing illegal pesticide residues should not be consumed.” Therefore, the Mississippi State University Extension Service cannot tell you that it’s okay to consume fruits or vegetables that could contain such residues.

Without Using Toxic Pesticides, How to Kill the Insects which Come to Parasitize my Plants?

It depends on plants and insects (and other pests). Is it a pot, a garden, or a field?

I would say to inspire you, gardeners, within the limits of the necessarily weaker means of an amateur. Contrary to popular belief, they don’t just dump chemicals. Plant protection is managed in an integrated manner, by combining a whole range of techniques wisely. In addition, I also learned during my career that a problem often has several origins. Small range:

Pesticides are all toxic, at least to the target insect. Otherwise, they would not kill. “Natural” or “chemical” does not change the matter, it is a purely ideological differentiation.
Host plants and clean. You’ll get mosquitoes if you leave an old tire outside with standing water (I’m from the West Indies). In a field, it’s the same. Some plants act as reservoirs for parasites, others do the opposite.

Biological weapons: a vast subject. Traps attract certain insects, which makes it possible to detect or even eliminate them. There are also predatory insects (eg ladybugs) on the market. As well as bacterial preparations, such as Bacillus Thuringiensis, a disease attacking the caterpillars.

The well-being of the plant in general. A robust and well-nourished plant will resist better. Certain varieties are selected for this purpose (more valid for diseases than for insects).

As you prepare for the fall gardening season, and future vegetable and fruit crops, the best advice we can give you is to “read the pesticide label and strictly adhere to the use directions it contains.” One of the key pieces of information to determine is to make sure the pesticide product is cleared for use on your specific crop. 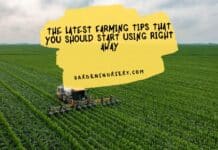