Cherry blossom trees are popular around the world. They seem to be most significant in Japan where they symbolize a kind of lifestyle and amount to a religious event, with popular celebrations and hope for the future.

The cherry blossom season in Japan is covered by a festival where crowds gather at parks all around the country to celebrate the event.

It is at the center of the celebration of culture and religion in Japan, a period of renewal, during the cherry blossom season.

The Japanese have respect for beauty and nature that is reflected in their culture and everyday life. Nothing is more significant to them than the Sakura, which is the name they give to their cherry blossom trees.

The flowers symbolize the brief cycle of life and renewal. The tree is a frequent motif in clothes and household goods.

My husband and I were fortunate to visit Japan a few years ago. We were advised to go during the cherry blossom season. This is a movable feast, with the flowering moving steadily across the country.

We timed our visit during the blossom season, staying in a Tokyo suburb during April. We first saw it in Oueno Park, a famous location for hanami, which is the name given to looking at the flowers.

The local population visits places specifically to view the blossom. There they were in the park, dozens of people holding up their mobile phones and cameras to take pictures.

There are different varieties of Sakura, including one that resembles a weeping willow. The flowers are white, pink or white tinged with pink. They are truly beautiful, especially when seen against the backdrop of a shrine or temple.

Cherry blossom is so much a part of the Japanese soul that it is referenced in paintings and songs. Even manga comics and anime films use it as a metaphor. There are Hanami Festivals and many parents name their girls, Sakura.

During World War II, kamikaze pilots would paint Sakura on the side of their planes. These pilots did volunteer for suicide missions but their elders pushed them in that direction by persuading them that it was a noble thing to do.

Being honorable meant everything to the young men and they were told that they would be reincarnated as the blossom; such would be their reward.

As a unifying symbol for all the people, I can’t think of anything equivalent in any other country. The young seem to enjoy Hanami as much as the older generation.

It’s certainly true that no one could be miserable when looking at cherry blossoms. When I see blossom in my own country now, I am instantly taken back to that Japanese park and all the smiling faces there.

They were simply happy that the Sakura had lived up to its promise once again and filled their lives with color and scent.

Cherry blossom is such a cultural event in Japan, one may even say it is as significant as Thanksgiving or Independence Day is in the United States. People everywhere in Japan, spend this period celebrating the cherry blossom and they look forward to such an event.

It only happens once a year. But then so is Thanksgiving and Independence Day.

How to Grow String of Turtles Indoors “Peperomia Prostrata”

Is Cleome Hard to Grow? 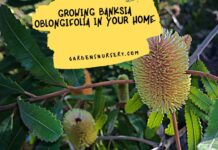 Growing Banksia Oblongifolia In Your Home