Garden Paths That Go With the Flow

Straight and narrow or curvy, paving stones or pebbles, Garden paths add interest to any yard

While the adage, “It’s not the destination; it’s the journey,” usually refers to life, it’s also the perfect approach to designing a garden. Julie Moir Messervy, landscape designer and author of Home Outside: Creating the Landscape You Love (Taunton Press, 2016) believes garden paths not only “choreograph the journey,” they are essential to creating a sense of flow. “Without flow, a property is made up of a series of unrelated spaces,” Messervy says. With flow? A sense of space and harmony evolves.

While options are limitless, by default many builders install straight, cramped paths that hug the house. “This is good for the builder, not the visitor,” Messervy says. On the other hand, campus designers often find their artful garden paths ignored, and end up paving the shortcuts students carve out dashing to the class via a more direct route. Since no one approach is right for every situation, Messervy suggests you experiment before you add new garden paths or change existing ones. Walk your property, trying different routes. What works for your yard and under what circumstances? When you find the best path, chances are you won’t be walking as close to the house as the builders presume you do.

Frost was wrong. The road less traveled doesn’t make all the difference. It’s the pauses along the way—at least with gardens. Whether you select a straight, curved or meandering path, create a pause at the beginning and at the end. If the route is long enough, create a resting spot in the middle or at several strategic points along the way. What makes visitors pause? Triggers can be subtle, like an arbor, a planted urn, or a piece of statuary. Resting opportunities can also be overt, like a table and chair. 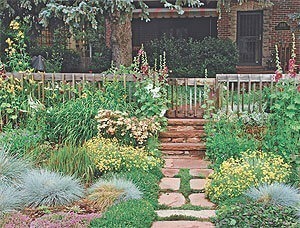 These efficient, no-nonsense stretches provide the shortest route from A to B. Sacrificing interest for efficiency, they’re easy to navigate, easy to shovel, and easy to forget.

When to use Paths:

Straight paths are the best choice for work routes. If you’re hauling wheelbarrows of yard waste to the compost bin or carrying dinner trays to your barbecue, keep the path straight—and not necessarily narrow.

This path is straight yet pulls the visitor in. The broken stones with the grass in the middle prompt you to look down to see where you’re stepping. As you do, colorful, low-lying plants create points of interest. Near the threshold, the path becomes solid, freeing you up to admire the hollyhocks before you climb the steps to the porch. 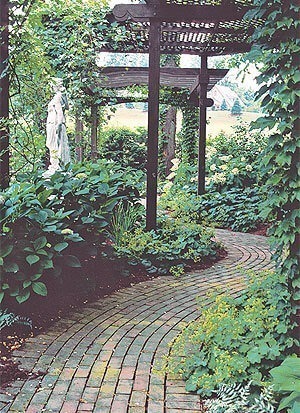 When to Use Paths in your Garden:

When you have to get from A to B but want to create a sense of space and provide a welcoming atmosphere, a curve will do the trick.

A curved path is automatically more intriguing than a straight one, but a simple bend isn’t enough. The path in this photo provides surprises by hiding what’s around the corner. The statue, set back from the curve, offers a place to pause while the covered arbor overhead creates flow and unity. With many curves, meandering garden paths impart a sense of invitation and mystery. They practically beg to be wandered.

When to Use Them:

Choose meandering paths when you want to create a peaceful atmosphere or invite visitors to explore. Many practical gardeners have a hidden “sneak path” to take them directly to their destination, while visitors arrive via the longer, more scenic route.

Because meandering paths are long, add plants at each curve to make the wander worthwhile.  When designing your meandering trail, imagine you’re a child who can’t wait to see what’s around the bend. “If there’s a tree, a grove, a wall in the way, it’s more interesting than a clear view that shows all,” Messervy says. In this example, although the view is partially obscured, the S-curve draws the visitor’s focus forward. As you navigate the stepping stones, flowers at different heights create interest, while trees act as guideposts along the way. When you finally arrive at the view, a sitting area rewards your efforts. 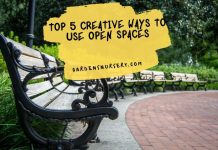 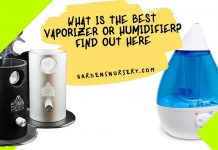 What Is The Best Vaporizer or Humidifier? Find Out Here 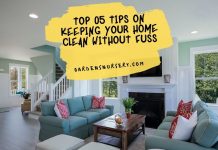 Top 05 Tips on Keeping Your Home Clean Without Fuss 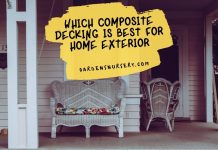 Which Composite Decking is Best for Home Exterior 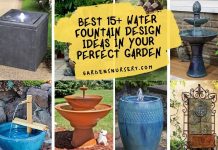