How to Grow Worm Compost at Home?

This is an easy, fun, and educational way to compost and improve your banks and vegetable gardens’ soil and maintain a beautiful lawn…Use the voracious appetite of the peaceful, discreet worms, at the same time respecting the environment.

So what exactly is worm composting?

Worm composting consists of producing compost by using worms.  Red Californian worms are used because they consume a huge amount of waste.  They eat decomposing organic material. They then discharge little excretions that enrich the soil. Each day, they can absorb and excrete the equivalent of their own weight. Worms also dig tunnels and ventilate the earth. This helps root the plants and develop micro-organisms. Red Californian worms produce a rich compost with a healthy hummus smell.

Compost is produced after about two or three months. The red worms are very prolific. After three weeks of incubation, the eggs hatch, and each egg produces up to twenty baby worms. These reach sexual maturity in three months – then they start to reproduce again.

Worm compost is very stable, and there is no risk of burning.

How Does a Worm Composter Work?

The worm composter is a type of box placed directly on the ground.  This area should be fairly sheltered and not exposed to extreme temperatures.  If you are in a mountainous region with shallow below-zero temperatures, protect your worm composter in a garage or put bales of hay around the box.

Ideal temperatures are between 8 and 27°C. Still, worms can survive in below-zero temperatures (their activity is slowed down) and in positive temperatures less than 26°C (always keep the bedding humid).

Maintenance consists of feeding your worms with food waste.  Worms can be fed at any time of the day.  Don’t worry if you have to go away for a few days or weeks; just leave them a layer of food before going.  If you go away in Summer, ask the neighbor who waters your garden to humidify your bedding while he’s at it. 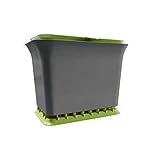 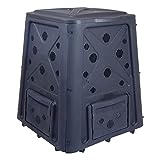 It depends on the number of worms you have.  They eat their own weight each day and double their population every two or three months.  If you start with 1,000 worms, that is 500g. Of adult worms (their rings can identify them), they will eat up to 500g. Of waste per day.  The population will have doubled after a few months, and you can feed them more.

The bedding should always be humid without being drenched, especially in hot weather.  Humidity and heat favor reproduction.

Is there a risk of having too many worms?

No, you can never have too many worms.  They regulate their population according to the space available and the amount of food.

Earthworms – Those Fertilizing, Rototilling Wonders in your Soil

The many virtues of the lowly earthworm have long been recognized, with Cleopatra famously declaring them to be sacred – they benefited Egyptian farmers that much. Then Charles Darwin deemed them worthy of 40 years of study and wrote a whole book about them.

Here in North America, the original earthworms were killed off during the last Ice Age, leaving tiny land suitable for farming. The few worms that did survive are poor soil-builders and wiggle off to undisturbed parts at the first sign of farming. That’s why America’s organic farmers have turned to European earthworms to make the soil fertile to be productive.

So how do earthworms help?

Where to start?  First, their castings are high-test compost packed with nutrients. And by burrowing through the soil, they leave passageways for air and water, which relieves compaction and improves drainage. As if that isn’t enough, earthworms discourage harmful insects and diseases while promoting beneficial soil bacteria. Studies have shown that the introduction of earthworms to farmland has resulted in yields increasing by as much as 20-fold!

There could be as many as 125,000 earthworms in a typical quarter-acre garden, or there could be none. Though gardening will usually attract earthworms, the use of synthetic fertilizers, herbicides, and insecticides makes the soil too toxic for them to survive, much less thrive.

So if your soil is missing these miracle critters, the first step is to stop using toxic products. Then if you just spread a 2-3 inch layer of organic matter on top of the soil every year (keeping it away from the stems of your plants), worms will magically appear. They come for the delicious organic-matter dinner and stay to reproduce like the hedonists they are.

Leafmold, which is simply chopped-up and partially decomposed leaves, maybe the best earthworm meal there is, and it’s my favorite mulch. My town collects our leaves in the fall, chops them up, and offers them back to us the following spring as leafmold, and if you don’t do that, now’s a good time to make a pitch for such a win-win recycling program.

Another option is to jump-start your garden’s earthworm population by ordering them in Amazon. Just scatter them on the ground, and in about 3 months, they’re all grown up, making babies, and working hard to improve your soil.

Do you have recycled waste in your house? If the answer to that question is yes, then you can start an organic worm farm in your garden. The process is straightforward, really, and it is also very inexpensive.

Everything you need can be found in your local hardware shop, so you don’t have to go too far. You will need three black utility boxes with some loose lids. Make sure you can open and close the lids easily. You will also need 12 x20 mm electrical threaded pipe connectors. You will be using these pipes at the base to allow the worms to move around from one box to another. Next, you need 2 spade drills and 4 air vents. Don’t forget the electric drill.

Place one box on top of another, and then place the whole thing pretty much anywhere in the garden. Place worm tea in the bottom box while the top two boxes should hold the worms. You will need worm compost which you can make from paper and table scraps.

Drill six holes at the base of the box in the middle with the drill, and insert the connectors. The longer part of your connector will be placed so that it remains on the outer side of the box. This will help support the other boxes. Make sure you drill the holes right, and the boxes are fitting properly. You will not drill holes in the bottom box because you are going to place worm tea in it, and because it will be placed on the ground.

You will notice that no foul smell is coming from the box and that it is working perfectly if you have done your job right. The process will take time, but you will get worm compost that you can use to maintain your garden all year round. This is practically liquid gold for people who love gardening.

How To Turn Kitchen Waste Into A Compost

The Top Benefits of Mulching Your Garden