Xeriscape is a term that we don’t use much in the USA because it refers to landscaping with water conservation in mind. Since at times it seems we live in a virtual “flood zone” there’s even less motivation to contemplate a xeriscape. However, if I told you that with careful use of xeriscape principles you could lower your water bill and reduce landscape maintenance. Would you be interested?

Contrary to popular belief, xeriscape does not necessarily mean a landscape full of cacti and other succulents.

The word “xeriscape” was actually coined in Colorado in 1981 during a serious drought. It is derived from the Greek “xeros” and the word “landscape“. Many municipalities and communities around the country incorporate xeriscape principles into their practices, not just because of years of record low rainfall, but also because per capita consumption of water has increased over the last 40 years.

Consider research from Georgia that shows daily use of water in Atlanta rose from 50 gallons per person per day in 1965 to a whopping 200 gallons per day in 1991! And, according to national statistics, 35 percent of the water we use at home is applied to lawns and gardens.

Water costs money and it takes time and effort to apply it. However, we can reduce the need to water without resorting to a landscape full of cacti and other succulents. Xeriscaping involves a seven-step approach to water use reduction, yet it doesn’t take the application of all seven of these steps to see savings.

The Xeriscaping Involves a Seven Steps Include :

One of the best ways homeowners in the USA can incorporate xeriscape principles is to reduce the amount of turf. All the common turf grasses we use in our landscapes can be used in low water-use zones once established. Reducing the amount of water to lawns not only saves time and money but will also help the grass resist diseases. Turf can be reduced in landscapes by careful, planned addition of woody shrubs, trees, vines, and perennials that are available at local garden centers.

you can buy cactus and succulent plants from amazon store here:

Beautify Your Yard And Increase Biodiversity By Creating A Wildlife Garden 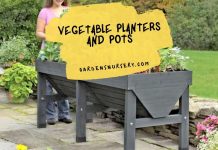 Planting With Vegetable Planters And Pots

Choosing a Site For a Raised Bed Garden

All About Weeping Figs