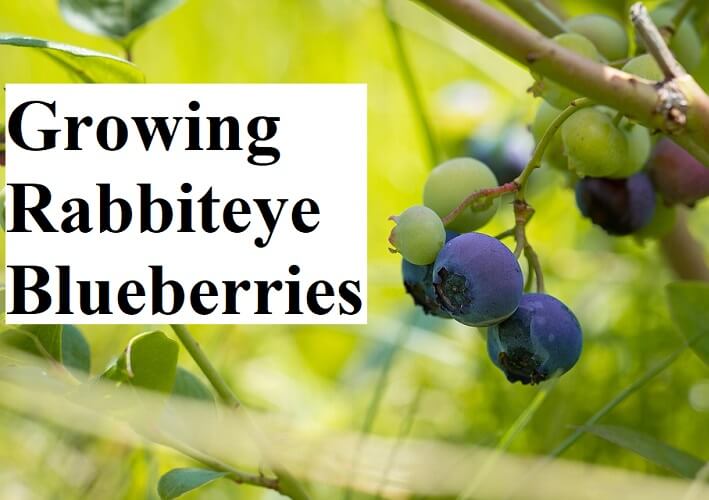 Rabbiteye blueberries (Vaccinium spp.) are the perfect fruiting shrub for the South. I’ve never run across another fruit that was so tasty and yet so easy to grow. Before I ever thought of growing this plant in my garden, my less commercially as I do now, I remember seeing one growing along a fence row. It was cleared at one point but was now choked with Chinese privet and young pine trees that shaded and tangled themselves in the poor little blueberry bush. The bush would not have been visible without all the large powdery berries hanging off of it, which I promptly sampled. I was impressed. Even I couldn’t kill a plant that could take this much neglect and still pump out delicious blueberries. The experience eventually led me to plant 800 rabbiteye blueberry plants in our old horse pasture.

The unfortunate thing is that a good chunk of the country can’t grow this plant. Being a Southeast native, it resents being moved to colder climates. USDA Zone 7-9 is the range that they like, and the farther south you get, the better they like it. None are grown commercially that I know of the north of Virginia.

Rabbiteyes are similar to the northern and southern highbush varieties, but surpass them in almost every way except taste, which can be nearly impossible to tell the difference- at least to me. Rabbiteyes grow very vigorously. I have 3-year-old plants that I can’t reach the top of. If left unpruned and to their own devices, the plants will grow up to 12 feet tall! Because of this, they should be spaced farther than other types of blueberries. I plant mine at 6-foot centers. Yield is usually heavier as well. In my field, I find the difference in yield between the Southern Highbush cultivars and the Rabbiteyes enormous.

Rabbiteyes have No Major Pests or Diseases When Grown Correctly

If you plant them in wet soil, you will most likely get a fungus called mummy berry, which can be very destructive, sometimes claiming as much as 75% of the crop. This nasty fungus shrivels the berry and turns it white, making the name very descriptive. The berries fall and act as incubators for the fungus for next season if not removed. For this reason, once planting gets it, it can be hard to get rid of without spraying fungicide. We’re all Organic here, so that’s not an option. Pay special attention to where you plant yours. Blueberries hate wet feet.

I go in every month (in theory) with Fish Emulsion and an Organic Liquid Calcium I buy online. Both these fertilizers are relatively cheap if bought by the gallon and last a long time. The most important fertilizing I do, however, is spraying with liquid organic potassium during the fruiting season. Once a month while the berries are green, and then every week during ripening and picking season. Potassium helps make the fruit sweeter, and I’ve found this method to work. Several of my customers have told me mine were the sweetest blueberries they’ve ever eaten.

Because of this, mulch is imperative for two reasons. For one, a blueberry plant cannot compete well with grass or weeds, even though Rabbiteyes have more vigorous root growth than other types of berries. Also, the root system only goes so deep to pull up water. Without mulch, the top few inches of soil that the plant’s roots dominate will dry out much quicker. If you don’t believe that it could make much of a difference, give it a try. Plant to bushes at the same time. Mulch one heavily and don’t mulch the other. I think you’ll be amazed at the difference in the first year.

To space out the season, plant as wide a range of cultivars as you can. If you can get a hold of the following cultivars, “Premier” “Tifblue” and “Centurion”, then you’ll have fresh blueberries from late May to late July. Like other blueberries, they need cross-pollination. So get at least two early varieties, two mid, and too late. My favorite varieties are:

To lengthen the season, even more, plant some early Southern Highbush plants, which come in long before any of the rabbiteyes.

Rabbiteyes don’t need much in the way of pruning but do be sure to get rid of any branches growing inward. When the plants get taller than you can comfortably pick, go ahead and top the plant. Don’t be afraid to take off too much, it’ll all be back next year, I promise you. The time to prune is immediately after the picking season. Don’t prune too late or you’ll cut off next year’s buds.

If you live in the South, it’s a crime to not grow Rabbiteyes in your home garden. Planting season‘s just around the corner, so if you’re not already growing these wonderful fruits, you can soon rectify that!

Blueberries are Good for you and Taste Great

Fresh blueberries are finally here and now is the time to load up on this USA favorite! Blueberries are great whether eaten fresh or in one of the countless recipes developed to delight the taste buds. Blueberries are readily found at local grocery stores, blueberry farms, farmer’s markets, or maybe even your neighbor’s backyard (with permission, of course).

Blueberries have increased in popularity over the past few years for several reasons. Dr. John Braswell, Mississippi State University Extension Fruit, and Nut Specialist describe blueberry as the “celebrity” fruit. Some of the reasons for it’s well deserved “pop” status is that blueberries are low in calories, high in antioxidants, fiber, and vitamins C and E. Eating blueberries may help us fight cancer, diabetes, reduce the risk of stroke and heart disease and lower bad cholesterol levels.

Consumption of blueberries may also improve eyesight, sharpen memory, and help prevent Alzheimer’s and other forms of dementia. These tasty berries have also been proven effective against urinary tract infections, reversing skin wrinkling, and shows positive results in children with ADD.

The kind of blueberry we typically grow in the USA is called rabbiteye. Plant scientists developed the rabbiteye blueberry from our native species. This is why they perform so well in our climate. Some of the more common cultivars of rabbiteye include Climax, Premier, Brightwell, Tifblue, and Powderblue.

Rabbiteye blueberries are a non-climacteric fruit and will be allowed to ripen on the bush. The fruit of most varieties will ripen over a 4 to six-week period. a traditional season can extend from late May to late July. Don’t pick the berries until they’re fully ripe; otherwise, the fruit is going to be bitter. Once the berries begin to ripen they ought to be picked every 5 to 7 days. Birds seem to be the key pests. A mature bush can produce 15 lbs of berries (about 9,000 lb per acre).

Blueberries are quite easy to grow, require minimal maintenance, and are virtually pest-free. Six bushes will provide plenty of fruit for most families. The harvest period may be extended from May through July with careful cultivar selection. Blueberries thrive in soil that is moist, well-drained, and rich in organic matter with a pH of 4.5 to 5.5, so no lime, please.

Blueberry bushes are typically purchased as two-year-old plants in nursery containers or as bare-root plants. For the latter, take extra care to prevent the roots from drying out. Most are planted from November to February. Unlike other plants, blueberry bushes are set in the soil one or two inches deeper than they were grown in the nursery. Once planted, they benefit from two or three inches of pine needles or ground pine bark mulch.

To ensure a good fruit set, plant two or more cultivars that bloom simultaneously. For instance, Brightwell, Climax, and Premier have similar bloom time and ripen early. Tifblue and Powderblue are considered mid to late season and will extend the harvest period.

Harvest Veggies: Picking At The Peak

Top 12 Easy Steps to Get Your Natural Lawn Off Drugs