They come quietly, their bell-shaped caps ridged like a honeycomb. When trilliums nod, rain-laden, and yellow Dutchman’s breeches push through snow-pressed leaves, it’s time to pick up knife and basket, don boots and take to the woods. It’s morel season, a fleeting month; time to go adventuring, expectation sharpened by the gentle thrill of this venerated hunt.

Morels, some say, are the most delicious edible mushrooms on Earth, prized by chefs for their delicate, nut-like flavor. They grow throughout North America, from coast to coast, and are known by dozens of names—cow’s heads,’ ‘burnsite,’ ‘thick-footed’—but they’re usually categorized as black, yellow, or half-free. Black morels are dark brown or black with lighter pits and a white stem. The yellow morel, most prized for its delicate flavor and meaty texture, is a lovely yellowish-brown. Half-frees are so-called because when sliced vertically, half of the cap hangs free from the stem.

just as you require a guide in uncharted territory, you must take an experienced mushroom hunter with you the first time you go. False morels lurk, their caps similarly honeycombed. True morels, when cutting open, are completely hollow. If it’s not hollow, don’t swallow!

Although they follow certain patterns, morels are unpredictable, shifting, vanishing, offering no sureties. They spring up in the black desolation following forest fires. They’re found around newly dead trees whose bark is ‘slippery.’ They’re allied with certain trees: white ash, poplar, beech, and maple. Sometimes they’re found on moist south-facing slopes, or in long-abandoned orchards. Certain verities apply: go after a rain, and with a hunter’s walk: slow, attuned to subtleties, keen-eyed. Lean, when you’ve found them, and either gently tug the mushroom from the ground or slice just above the dirt-covered base.

What you need to know Before you Go, Morel Hunting

Although morel mushroom hunters are avid to begin their hunt, in truth, it is the mushrooms that lie in wait. The main part of the morel mushroom grows underground in a vast, secret mesh called the mycelium. Mush­rooms are the fruiting bodies, thrust upward only when the mycelium is ready to propagate. When the mushroom is agitated, by hoof, wind or knife, millions of spores fly from the cap.

It’s a moist spring day. You’ve had a good hunt. You lean and sniff the dark, earthy scent of your basket of morels. It’s the smell of sap; of white petals, pink-veined; it contains the crying of crows, puddles, wet twigs. You shake your gloves. Spores spin. You turn to your feast, an eager participant in spring’s renewal.

Check with your local mycological society for news on spring forays into the forests to hunt for morels. They include:

Morels, a book by Michael Kuo, is a great primer for the uninitiated on hunting this elusive mushroom; read it while taking a break at the Torch Lake Bed & Breakfast in Central Lake, Michigan, which lists morel hunting as one of its popular activities.

(Michi­gan, incidentally, is the unofficial home of the morel, with tons of sightings and specialists available.) 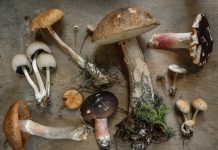 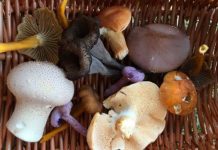 Wild Mushrooms – How to Forage for Mushrooms 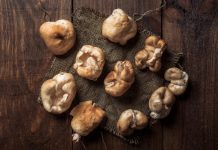 How to Grow Shiitake Mushrooms at Home