Brick is a wonderful material that can be used for many different projects when you are landscaping your front yard.  Bricks can add height, create borders or edges, make paths, or provide a patio or recreational area.

One of the greatest things about bricks is that it is an easy and inexpensive material to procure. Although you can purchase bricks new at any garden supply or building center, the environmentally-conscious or budget-minded might prefer to recycle older bricks.  Older bricks can be cleaned with just a little effort, soap and water, and a brush.

Although patios and recreational areas are usually relegated to the backyard, some lawns are more suited to having these areas out front. Creating a small brick patio is especially good if you only have a small porch. Since brick is easy to mow over, you will have no trouble maintaining your front yard with a brick patio.

If some of your lawn is frequently trodden on and grass has trouble going, a brick pathway can save the look of your front yard. Place a brick pathway where the grass refuses to grow and you will no longer have the unsightly bare patches. This path will also discourage visitors from walking on your lawn and ruining more of your grass. To keep this path from sinking into the ground, use landscape fabric to line the bottom.

When you are laying your bricks, whether it be for a patio or a path, be creative and make the bricks as attractive as possible. A great design to use when laying bricks is called the basket weave. A basketweave is a simple design that anyone can do. Simply alternate between vertical and horizontal while laying the bricks and you will receive many compliments.

Brick is a great way to order your flower gardens when you are looking to landscape your front yard. Choose a neutral brick tone that won’t distract the eyes from the blossoms. This brick border will help protect your plants while they are young from being trampled on by unknowledgeable visitors.

However you use brick in your front yard landscaping, take the time to choose bricks that will accent and add value to your lawn.

you can buy Brick for your home from Amazon Store here: If you have ever been into someone else’s back yard and seen a beautifully paved path winding through flowerbed after flowerbed, you will know that it is difficult not to be enchanted by it.

Whether they have a modern feel or a classic and traditional appeal, brick paths can undoubtedly add another dimension to any garden or yard, and better still laying brick pathway is a task that you can undertake on your own. Simple if you stick to step by step instructions, laying brick pathway is, in fact, a much easier task than it is often given credit for.

There is one step that you need to take before you actually start laying brick and that is actually choosing your path. There is any number of patterns, styles, and shapes of bricks to choose from. For example, you could have a straight path of one specific color with bricks that are laid straight.

You could have a winding path with bricks that are slanted in one direction. You may see something you like in someone else’s yard or in a magazine and want to copy it, which you can be providing that you know the basics of laying brick pathway.

You will need a whole day when laying brick pathway and will also need to make sure that the weather is fine if you want to actively make sure that the pathway remains in place and in the best possible condition for years to come. When you have chosen your day, follow the guide below to quickly and easily lay your pathway.

Read More: Best 5 Common Tips To Improve The Health Of Your Front Yard

1. First things first, you have to dig the path itself so you have somewhere to lay it. Plan out where you intend laying brick pathway. You should dig around 6 inches deeper before flattening the ground and making sure that it is completely level so that you can lay your bricks. Measure your pathway out properly and place 2 by 4s at the edges to keep the bricks level.

2. Use a little string and wooden stakes to mark the pathway in order to give you enough room to work when laying the brick pathway but also to keep others off it. After all, you have to make sure that it is allowed to set properly.

3. Line the bottom of the excavation with landscaping fabric to prevent weeds from coming up after you have spent all that time laying brick pathway. Weeds not only ruin the visual effect but also disturb the brickwork.

4. Line the bottom of the excavation with a layer of road base or gravel next to ensure that it is ready to support the bricks. Make sure that it is level before adding a layer of sand. The sand will offer a stable but softer base for the bricks. Again, level off the sand base and then move on to the final step.

5. Laying brick pathway is the final step. If you need half bricks then use a brick set to cut them. Simply lay all of the bricks as tightly as you can, leaving no more than an eighth of an inch. You should then shake a little sand over the bricks to fill even the smallest gaps before allowing the bricks to set for between 24 and 48 hours. Only then is it ready for use. 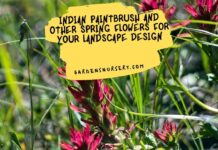 Indian Paintbrush and Other Spring Flowers for Your Landscape Design

Everything you Should Know About Tree Service

5 Things You Need To Know Before Hiring Tree Removal Services